The mile is my favorite distance to race, and the Charlie McMullen Mile is a race I look forward to all year.  This year was my 3rd time competing in this race, and each year I have gotten faster.  I will be turning 37 years old in less than a month and I have no idea how long I can keep improving my mile time, so a big part of me was thinking it was now or never to fulfill a lifetime running dream of breaking 4:30 in the mile.  You may be thinking to yourself  “Everyone runs a 4:30 mile in high school”, or maybe you haven’t read Once a Runner so you aren’t thinking that at all.  I thought I had run 4:28 for the 1600 meter in high school, which would be about 4:30 for the mile, but after some searching of old clippings and end of the year booklets from my high school track days the best time I could find was 4:28 for 1500 meters my junior year (I didn’t run track my senior year only xc) while I was doing the pentathlon.  That puts my best hs mile time at 4:45 at best, funny how the years do funny things to your memory and I suppose that is the point of the quote.  It isn’t that everyone actually runs a 4:30 mile in high school, it is jut that everyone says they did. 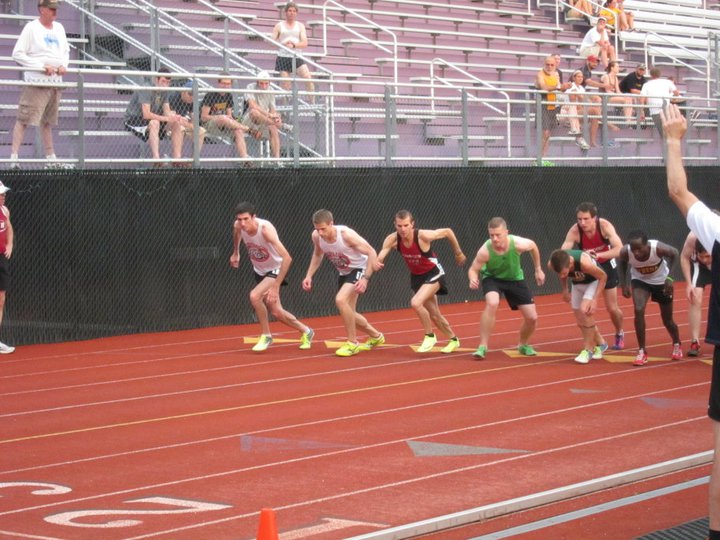 Last year at the MM both Mike Insler and I ran PR’s 4:34 for me and 4:36 for him.  We both felt like we could PR again and that we had a good shot at sub 4:30.  The previous 2 years the race had gotten off to a slow start, but this year a 2011 college grad was taking a shot at sub 4:00 so the pace was bound to be hot from the start.  The 14 man “elite” field toed the line about 8 pm the last of 7 heats.  There was a gentle breeze at our backs and it was about 70 degrees with the sun setting behind some tall oak trees, the weather could not have been better for a mile race on a June evening. 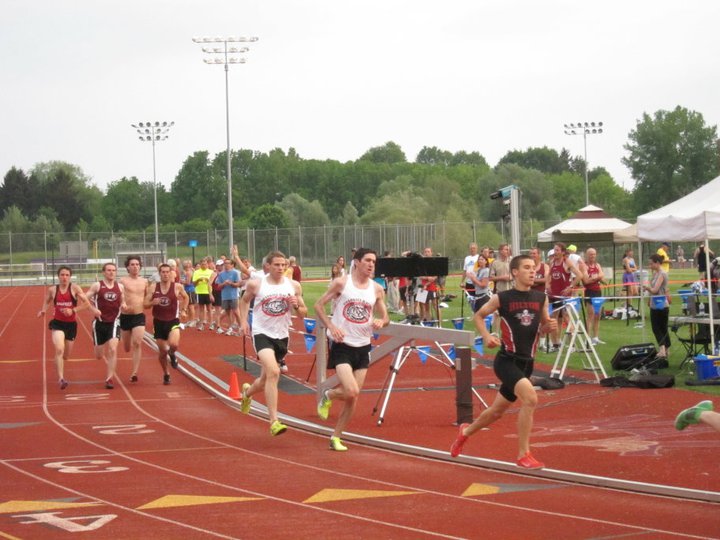 The first 400 went just as I hoped in a very manageable (or so it felt at the time) 1:06.  There was a large pack just ahead pulling me along but no one crowding me as I ran.  Mike went by me on the back stretch just before 600 meters and while I picked up the pace a bit I didn’t do much to fight him off.  I thought I would just keep pace behind him, but he quickly opened up a decent gap.

As we hit the half way point I was starting to struggle.  Mike had pulled away from me and no one else was yet pushing me from behind.  I came through in about 2:15 and I remember thinking I had to get moving if I wanted to break 4:30.  During the 3rd lap I did not “get moving”, instead I let Dave Bradshaw the only other 30+ runner in the race catch up to me and Mike continued to run strong and steady just like last year. 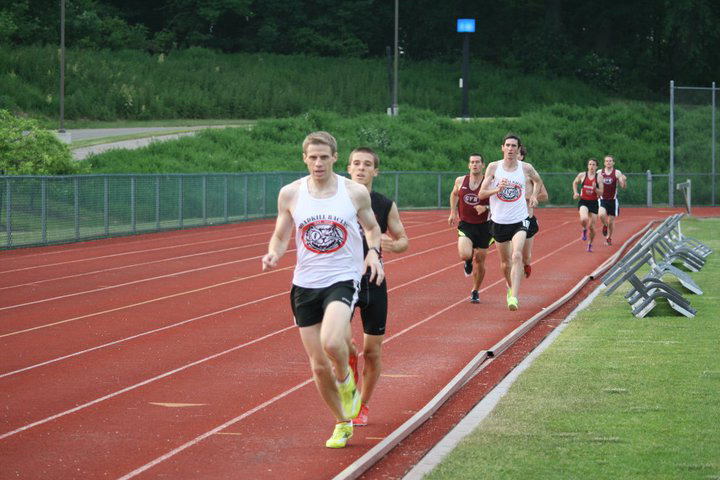 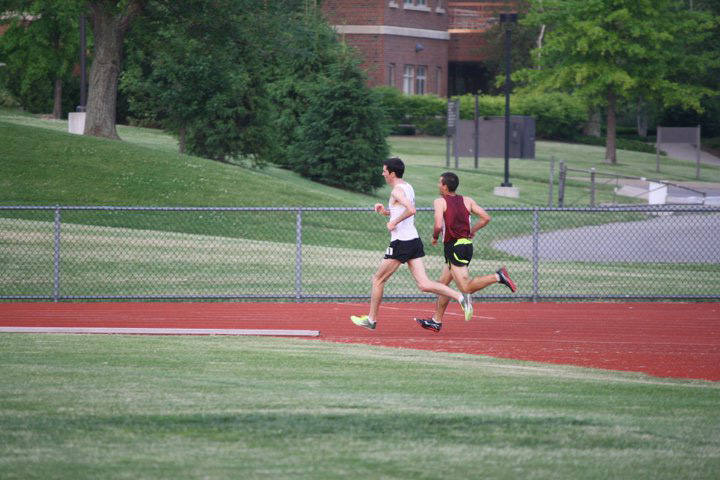 Hope was not lost though, I knew from a recent workout that I could in theory drop a 63 second final lap, that was about to be put to the test.  Even though I had dramatically picked up the pace Dave made it past me just as we hit the back stretch.  It was all I could do to stay on his heels as we slowly began to make up ground on the runners ahead of us.  We first passed a high schooler who had been clining to Mike’s back for much of the race, and with 200 meters to go the only people left we would able to catch  were Mike and Dave Rappleyea. 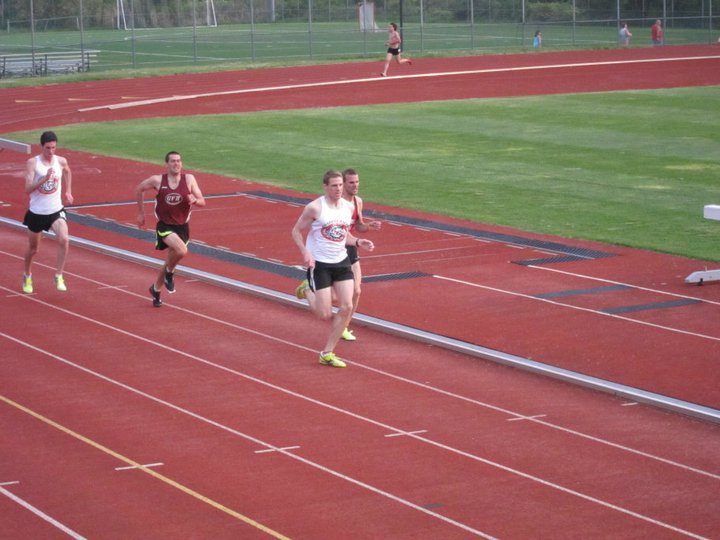 I should point out now that even though Mike and I are teammates, there is no one else that could motivate me to kick my guts out at the end race, especially a mile race.  And with 80 meters to go it would take everything I had to catch him.  Swinging wide into the 3rd lane off the final turn I dropped my hands and began that exhilarating mad dash to the line.  I had only one though in my head at that point, “I’m going by everyone!” 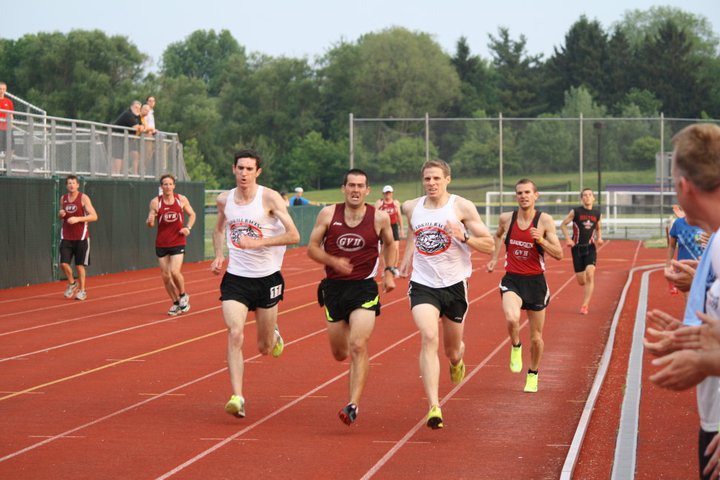 Dave Bradshaw and I were again side by side as we first caught Dave Rappleyea and then Mike. 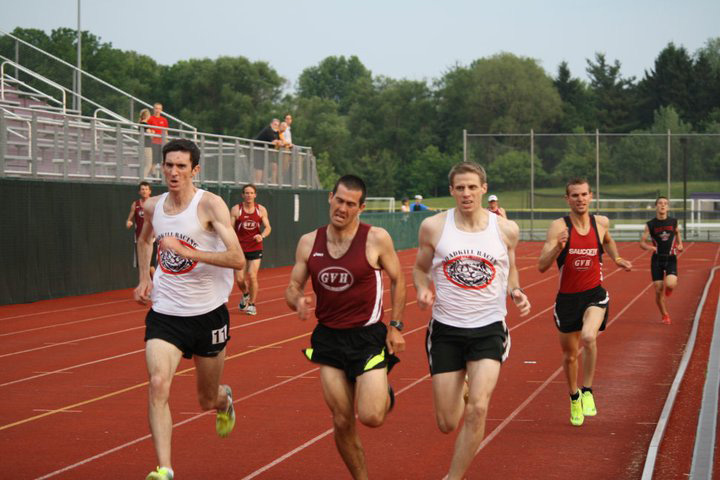 I hit the line first by .44 seconds (actually 7th, but for our little race with in the race 1st).  I was certain I had broken 4:30, I thought I had run low 4:28 and that Mike must have been less than a second back and also broken 4:30.  It turned out I was only partly right.  Mike was less than a second back .81 seconds, but we hadn’t both broken 4:30.  I ran 4:29.82 a PR and a dream come true.  If it hadn’t been for Mike Dave and Dave there is no chance I would have hit my goal.  This is why we race.  It is the spirit of competition that compels us to push our bodies to their limits.  I don’t know if I will ever run a mile that fast again, but as long as I have people to race against I will push myself that hard for years to come.