Today I competed in the Holiday Classic indoor track meet at RIT, running the 5000 meters. As I am writing this entry, I completed the race just over 3 hours ago, so hopefully I’ll be able to report many of the most interesting details. I was really happy to have Karyn and Josh come to the meet as spectators to cheer me on, take some great photos, and call out my 400 meter splits.

Although my volume hasn’t been quite where I’d like it over the past couple of months, Josh and I have thrown down some great workouts recently at the UR indoor track, and our huge 3000m PRs two weeks ago confirmed that we are running very well right now. I had a lot of confidence that I could demolish my 5K PR from last February (16:28, indoors at Cornell), but I wanted to see how far I could take it. For today, I set a lofty goal of breaking 16 minutes.

The race start was well organized, although they did not line us up by seed time, as you can see in the picture above (granted, the 80 lb. kid to my left ran 5:00 to come through the first mile ahead of me by 6 seconds–I went on to beat him by a good margin, a huge relief of my ego). I got a bit boxed in at the start, and the first 200 meters were slower than I wanted. I reminded myself that with 4800 meters to go, this was no big deal. I made a move to the outside and ran the next lap in Lane Two to come through the first quarter in 76 seconds (my goal was to keep the pace even at 76’s for the duration). After a half mile, the lead pack had pulled away and I was relegated to join a few chasers who where drawn out 20 to 30 meters behind the leaders. I hit 75, 75, and 77 low to come through the first mile right on pace (5:06). 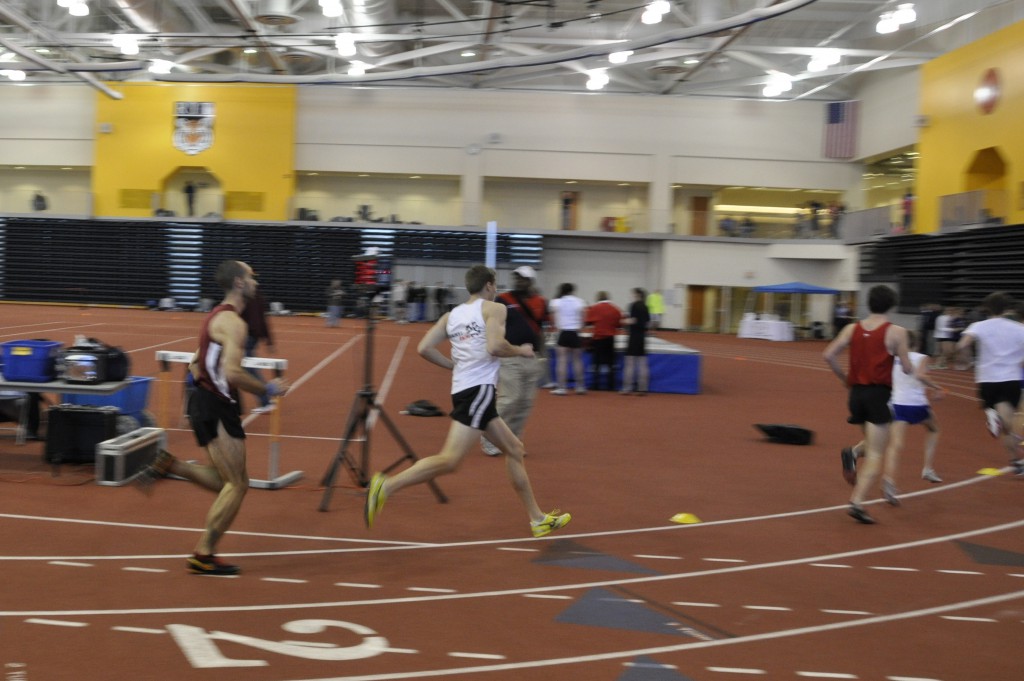 I felt fairly good at this point, as I strove to keep an even pace at 76 seconds per quarter mile. With the leaders pulling away and no one from their pack coming back yet, I was caught in competitive limbo. Each quarter mile, I marginally increased the effort level but Josh’s booming proclamations of “SEVENTY SEVEN MIKE!!!” confirmed that I was only doing enough to not slow down, running four consecutive 77s. Mile number two ticked away in 5:13. Those damn tenths of a second make a difference!

Despite being a bit off pace, the 16 minute mark was still within reach. Coming into the last mile, I heard Josh encouraging me to work hard to catch a few runners who were falling back to me. Around the 12 minute mark, he also yelled “Only four minutes left!” — an eternity at the end of a 5K. I worked hard to catch and pass a few competitors, but I just could not sustain my goal pace, splitting the next three quarters in 79, 77, and 79.

At this point, the pain had really set in. As I approached the finish line clock with 800 meters to go, fatigue had destroyed my capacity for simple mental arithmetic. Fortunately, Josh shouted something like “YOU GOTTA RUN 2:30 MIKE!” I tried in vain to convince myself that our nasty 6x800m workout averaging 2:28 had prepared me for this, but running that fast was almost unfathomable at this point. Coming into the last 400 meters, I caught and passed a guy in dark green who then out-kicked me in the last 150 (see picture below). I gave it everything I had, but my legs just couldn’t find the turnover to match his pace down the stretch.

I finished in 16:07, a PR by over 20 seconds. Although it would have been incredibly satisfying to break 16, I feel like I left everything on the track today, especially given how the race shook out competitively. I hope to be able to convince Josh to run the 5000m at an indoor meet in February. I believe that with a little more training, we’ll be able to work together to reach that mark. My life will be pretty hectic over the next couple of months with job interviews and (hopefully) fly-outs, but some hard winter training should be possible, not to mention helpful for my sanity.

I’ll post a link to the official results when they are available.