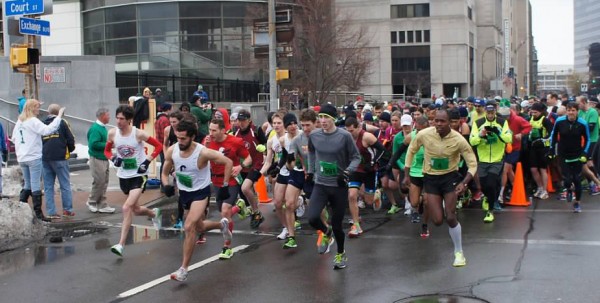 While not quite as cold as some of this year’s Freezeroos, the dampness and 15-25 mph winds certainly made it feel wintery enough at what is the unofficial Spring kick-off race in Rochester, NY.  Johnny’s Runnin’ of the Green 5 miler, which annually draws about 2000 runners, is the first race of the year when all the fast guys come out of hibernation and remind us that dominating the Freezeroo series isn’t the same as being a dominant racing team.

Despite being out gunned at the very top of the race we still managed to put 3 runners in the top 10 going 6-7-8.  Personally it was my first time cracking the top 10 and amazingly it was Dave’s first time running Johnny’s!

It was tough race for Derrick in his Roadkill Racing debut, but he was smart to shut it down and protect those legs for the rest of the season.  Dave and Derrick are both targeting the Buffalo Marathon in late May as their Spring goal races.

In other Roadkill news Matt and Ashlie were down in North Carolina running in the Tobacco Road Marathon along with some of the ladies from Brockport Distance Project.  Both finished the race and still have legs, as far as I’m concerned that is a win where marathons are concerned.