Next up in our continuing Know Your Racer series is Drew Caffrey. 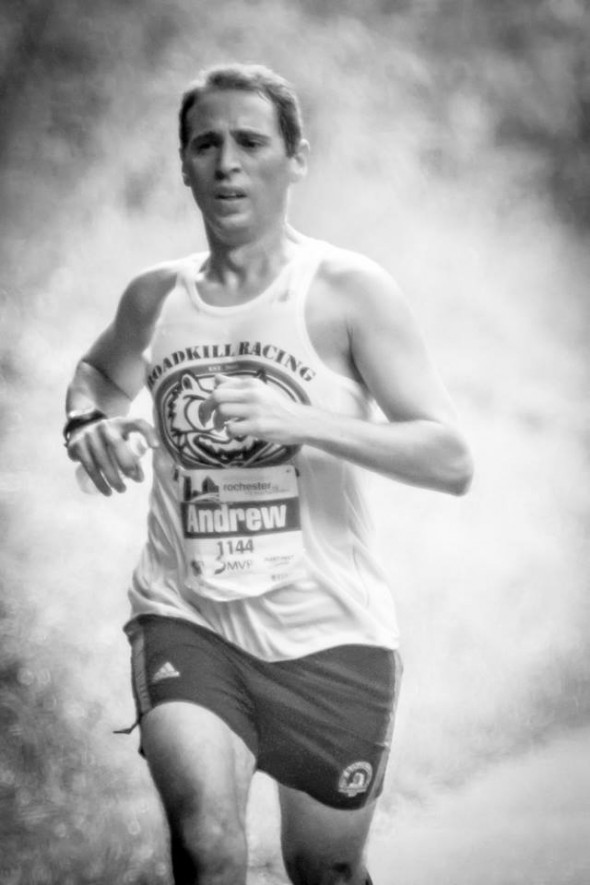 Drew has been running with Roadkill Racing since our 2012 cross country season. Drew is engaged to fellow Roadkill Racer Erin Mahoney who was one of the first women to commit to the team last spring.

What is the first race you remember running?

I ran in a summer track club when I was in middle school. The program always finished with a mile fun run at the Cazenovia 4th of July races. The earliest memory of a road race was winning that mile fun run (I think I was like 11) and then I moved on to the 5k the next year. This race was an annual event for me right through high school (although I never did the 10 miler).
What is your favorite distance to race?
I love the marathon, although it consumes so much time/energy with training and recovery. When I was younger, I always preferred the 5k (I believed anything more was just too far to run).

What is your favorite race or running event?

Boilermaker 15k. It’s a fun/hilly course, great crowd support/bands along the way, my family is always cheering at the finish line, and there’s a huge party after the race.
What is the strangest thing you have seen while out for a run?

Why did you join Roadkill Racing?

I wanted to join a local running team, and some others had pushed me to join GVH in the past (but for a variety of reasons I never really felt like that team was for me). Erin actually suggested RKR, since the guys are fast and seemed to be a better “fit” with my personality. I love being part of the team, wearing the gear, and representing RKR… my individual running contributions to the team are fairly minimal, but hopefully that will improve when I can join the masters team (Jan 2018!).

What races are you looking forward to this year?

What was your best race ever (could be the best time your ran, or just a really fun racing experience or a race that just meant a lot to you)?

Boston 2013. This was my first sub-3 hour marathon and it was the perfect finish running down Boylston St, giving Erin a high five right before the finish line. It was also the shortest celebration ever, once the chaos began… It wasn’t until I ran Boston 2014 that I felt fully recovered from the tragedy.

If you could give 1 piece of advice to a new runner what would it be?

Most of your runs should be easy/fun. If you can’t hold a conversation, you’re going too fast. But on speed/hill/tempo/race days, it’s time to work.