So much for calling it a season. I was all set to wrap up my team racing for the year but duty called and I found myself toeing the line at the USATF New England XC Championship 2 weeks ago. I’ve also booked my flight to Lexington Kentucky for the USATF National Club Cross Country Championship on December 9th. 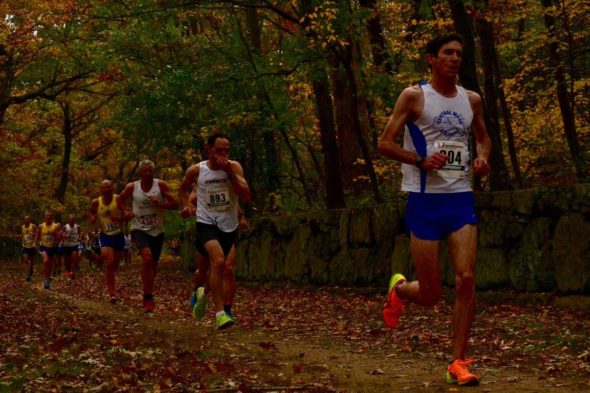 The New England XC Championship was back at Franklin Park, but this time it was an 8k race. BAA took off as a blob of yellow from the gun, and managed a perfect 15 points. Greg Putnam was our only runner to even challenge their top 5 finishing a few seconds back. I was second for CMS in 12th overall about a minute behind the lead pack in 28:10. The team finished 2nd Full Results Here. 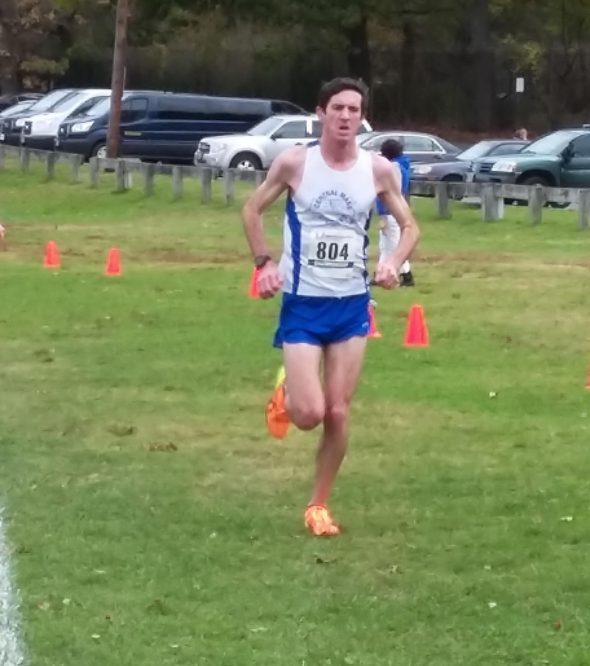 Next up was the After The Leaves Have Fallen Half Marathon at Lake Minnewaska, NY. Lake Minnewaska is a beautiful state park on the Shawangunk Ridge, overlooking the Hudson Valley to the east and the Catskill Mountains to the west. The half marathon course (actually closer to 20k this year) loops around the 2 lakes that sit at over 1600 feet, and provides amazing views throughout the race.

This was a rare instance when I actually noticed more than what was immediately in front of me on the ground during a race. 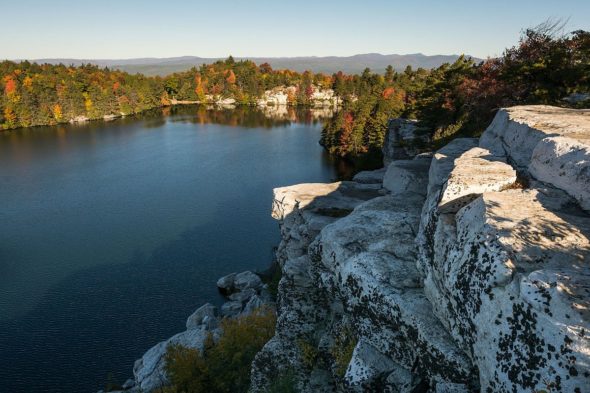 Since this wasn’t a team scored race, I broke out my Roadkill Racing kit and added a splash of red for maximum visual impact. Look good-feel good-run good! 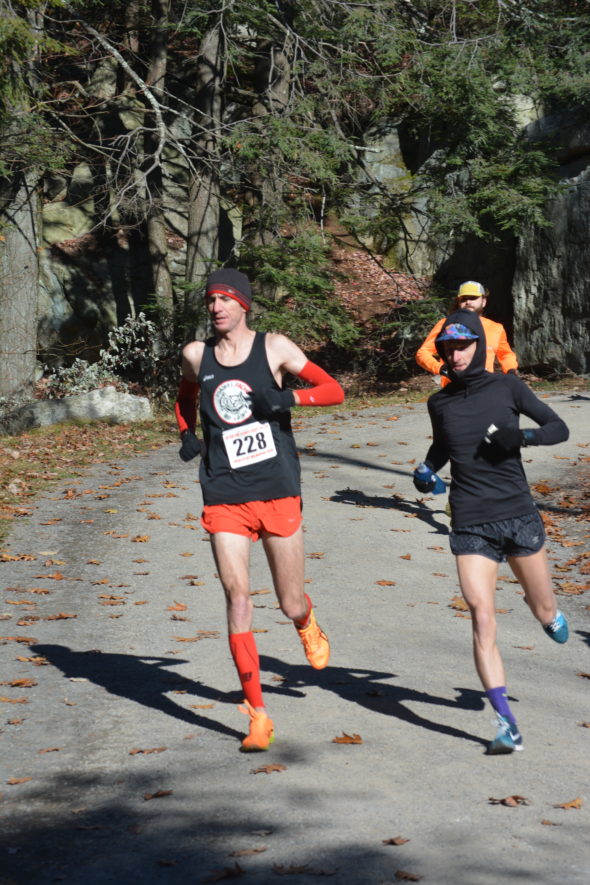 After a very hectic morning and an last minute save by my mother in-law, I made it to the race at 11:15 for an 11:30 start. Luckily a half marathon doesn’t require much warm-up and I was as ready as I could be as we lined up. It was a cool afternoon, but I’ll take 35 no wind and sunshine any day. The family were the ones who had to wait around in the cold while I kept warming running up and down the carriage trails.

For the most part the race worked steadily uphill for 8 miles before plunging down to it’s lowest point at mile 10. We were treated to the 2 steepest climbs in the last 2 miles, but thankfully they were both very short. 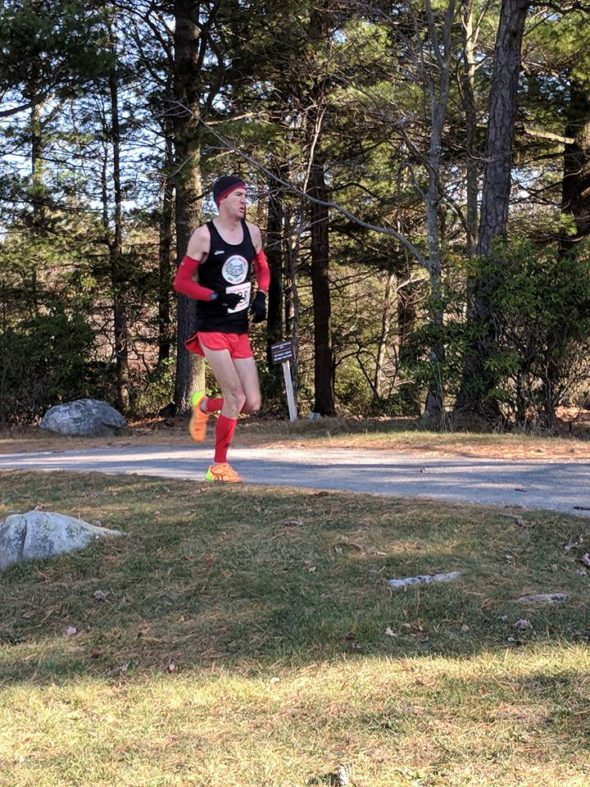 By the time I reached the last 2 hills I had opened up a gap on field including 2 time champ Mike Chow but I knew they would be on me in a hurry if I gave into my screaming quads. The dash down the mountain had really taken a toll and I wasn’t looking forward to the possibility of having to sprint it out to the finish. At the start Mike informed me that is what the race had come down to the last 3 years, and I was doing everything I could with 3 miles ago to avoid that. Mercifully the race was half a mile shorter than expected and I was spared from having to find another gear while on wobbly legs. 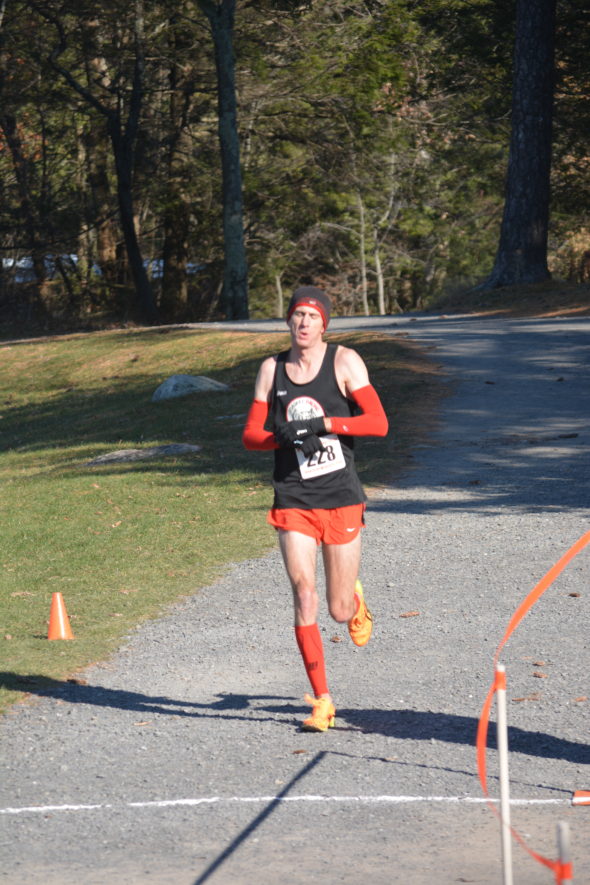 This was my first win of the year, made extra special by getting it on my home turf in front of my family and some old friends. It was great to be at a low key but well organized event. Big road races can be fun, but there is something special about trail races and the community of people who put them on.

The only downside to the day was there wasn’t anything to fill my beautiful new pint glass with! 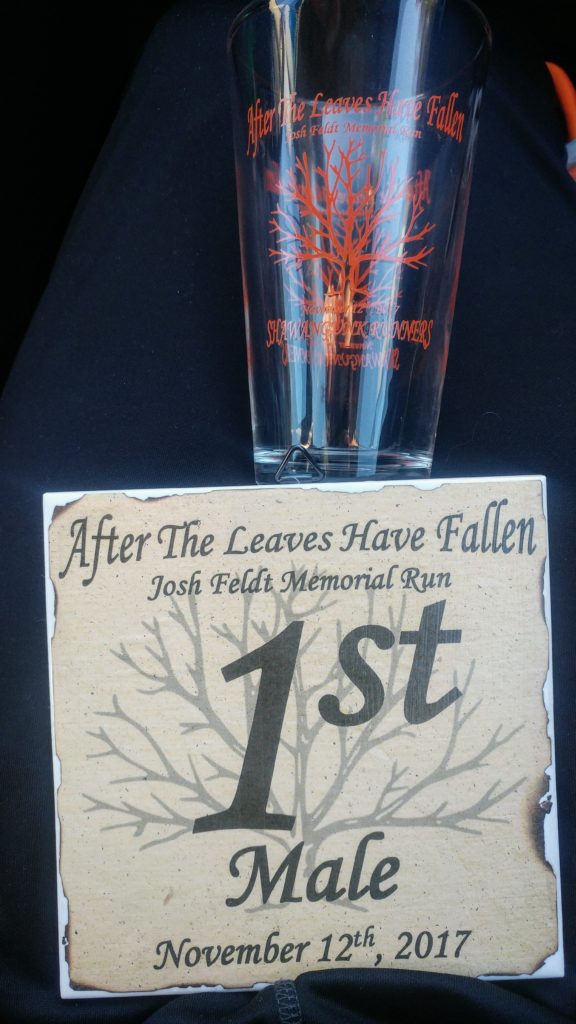 Next up is Club Nationals!