I’ve made some posts that I’m sure have rubbed a few people the wrong way.  I like to take digs at barefoot runners and minimalist shoe guy, but I try to do it in a humorous way and I guess whether or not I’m successful in that is up to the reader to decided.  What I’m about to say, is not meant to be humorous at all, and will probably upset some people including members of my own family.  I hope they forgive me.

Lance Armstrong is a fraud.

But not for the reason you think.  I couldn’t care less whether he took PEDs for some or all of his tour victories. By now you have probably heard that the USADA has stripped him of his Tour de France titles and banned him for life from cycling.  A ban which extends to his recent foray into triathlon as well.  If you want to believe that he cleanly dominated a sport that is dirtier than my daughters car seat after a 5 hour car ride that is up to you.  If you want to believe there is a vast French conspiracy to frame and discredit him go for it.  If you want to believe he is not fighting the charges or the ban by the USADA just because “There comes a point in every man’s life when he has to say, ‘Enough is enough.’ For me, that time is now,” by all means believe it.  Like I said I couldn’t care less about the sport of cycling and whether or not someone in that sport cheated.

No the reason Lance Armstrong is a fraud is the very reason everyone loves him and looks past the obviousness of his cheating.  It is Livestrong I have an issue with.  You know the constant refrain from Lance supporters, you may have said it yourself… “but he’s raised millions for cancer research!”  And if that was really true I’d be all in, but it simply isn’t the case.  He’s raised millions in the name of cancer, from people with cancer or from people who have survived cancer, or from people whose love ones have survived, not survived or are fighting cancer, but he absolutely has not raised millions or given millions to fund cancer research.  Where does that money go?  For a simple break down from the www.livestrong.com see the below chart. 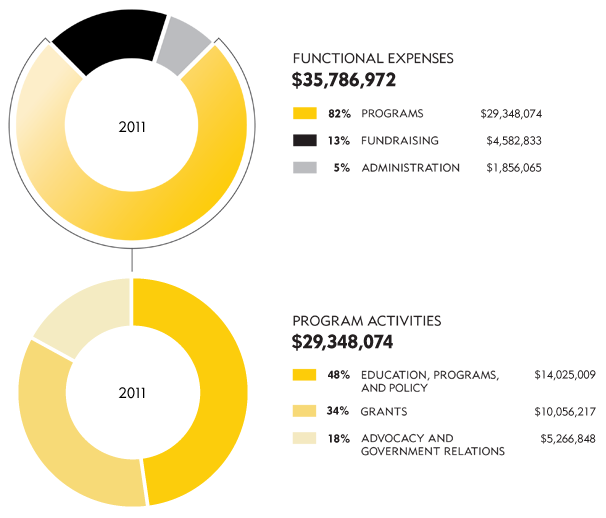 Do you see anything on there about research?  And before you say 34% of he money is for grants that must be research grants… it isn’t.  For a in-depth look at where the money goes you can read this article by Bill Gifford in Outside Magazine.  I am happy to say I don’t have cancer, and maybe I would feel different if I did but it seems to me that $29 million a year is a lot to spend on what amounts to at best cancer awareness marketing.  I think we are all pretty much aware of cancer at this point.  Maybe you agree with Doug Ulman the CEO of the Lance Armstrong foundation when he says “We are all about people,” he says. “Most organizations are about the disease. They’re about trying to solve a disease, and we are about trying to improve the lives of people that are battling the disease.… What can we do today to improve their lives? As opposed to saying we’ll fund research that in 15 years might help somebody live a little longer.”  As someone with a small child I am very interested in research, that 15 or 20 or 30 years from now, might help someone live a little longer (because yes Doug that is all they are hoping to accomplish with all their wacky test tubes and lab coats).

The Lance Armstrong Foundation (LAF) believes that in the battle with cancer, unity is strength, knowledge is power and attitude is everything. Founded in 1997 by cancer survivor and champion cyclist, Lance Armstrong, the LAF inspires and empowers people with cancer. We provide the practical information and tools people with cancer need to live life on their own terms. We take aim at the gaps between what is known and what is done to prevent suffering and death due to cancer. We unite people to fight cancer and pursue an agenda focused on: prevention, access to screening and care, improvement of the quality of life for cancer survivors, and investment in research.

Sounds really exciting and kick ass doesn’t it.  All those great buzz words like unity and power, hell I feel better just having read that.

Now let’s look at the mission statement of an organization focused on research.

Founded in 1953, The Cancer Research Institute (CRI) has been a leading and sustaining force in immunology and cancer immunology research worldwide. Through our advancement of these two scientific fields, we are learning how to manipulate the human immune system to target and attack cancer. Our goal is to discover and develop new, immune-based approaches to the treatment, control, and prevention of cancer. The Institute fulfills its mission by providing academic researchers at top institutions around the world the funding they need to carry out their important work. We have provided more than $175 million in financial support to more than 2,800 of the world’s brightest scientists.

People will continue to give millions to Lance Armstrong’s foundation despite him being tossed out of the sport that made him famous.  But if you want another place to give your money, here are some options which range from slightly better to much better.

Cancer Research Institute– Primary focus is on research and you can specify which type of cancer your want your donation to go toward.

Damon Runyon Cancer Research Foundation– 100% of your donation goes to research, their expenses are covered by their endowment and some crazy scheme involving Broadway Musicals.

The choice is yours.  You can give money to help prop up a cheating, lying, manipulative millionaire or you can help save lives.  Choose wisely.

Oh and don’t even get me started on those horrible articles written by so called experts on the livestrong.com site.  In a world where anyone can be considered an expert no one learns anything.