I have been struggling to write this post. I am torn between my excitement for how much the team has grown, how hard everyone competed all season and the final results. There were so many positives for Roadkill Racing this fall and I want to make sure I celebrate and share them all without tainting them with my own unrealistic expectations. So let me get the unrealistic expectations out of the way then we can move on to the celebrating of everyone’s accomplishments.

The Roadkill Masters team finished second to GVH in the series scoring after leading in points the first 4 races. We actually ended up tied in points because of an early season drubbing GVH took, but GVH owned the tie breaker with 3 wins to our 2. Considering I didn’t even think we would have a masters team a week before the season started I should be thrilled we came so close, but perhaps the closeness is what made it such a bitter pill to swallow. I’m proud that we pushed a team that has dominated so thoroughly for so long the brink, and I have high hopes for next season. We have a great team of masters runners and we only look to be better next year.

Our individual masters runners all had a stand out series. With 5 finishing in the top 10 of individual points.

Last year we did not have men’s open team. This year we fielded a team at every race. We returned a few runners from last year (Matt, Drew, Kenny and Brett) added a few new members (Dave, Kraig, Andy, Mark and Dan) and we saw the return of Pete from the injured reserve. This season the open men were lead by Dave Rappleyea who started the season fighting back from injury and raced himself into the top 10 finishing 9th overall in series points. Dave was followed closely (and sometimes led) by Kenny who finished 10th in series points despite running a marathon mid-series.

The team finished 3rd behind STC and GVH, beating out Cornell Running Club and Checkers.

I’ve saved the most surprising team for last. The Roadkill ladies.

As of last March there was no Roadkill women’s team, but under the dedicated leadership of Ashlie Roberts a team quickly coalesced. By the first race in the series the women had done a few months of weekly workouts and were ready to race. By the end of the series 14 women were racing for Roadkill.

The ladies ran hard all fall both in the series races and on the roads with many of them running PR’s in distances from 5k to the marathon. They are fired up for next year and are also on the lookout for a few 40+ year-olds to join Heather on a masters team.

I can’t help but think that it was the addition of the women’s team that helped spur the growth of the men’s open and men’s masters team. 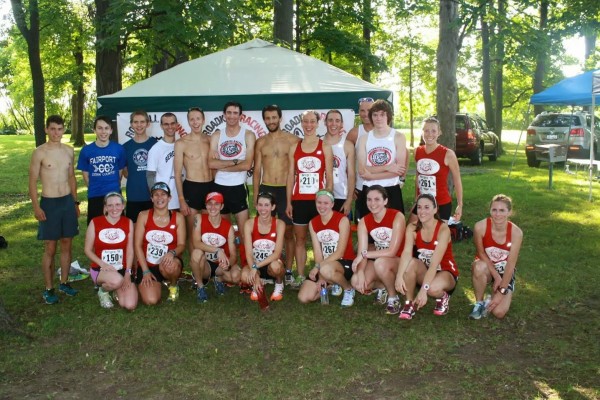 Here’s to a great cross country series and looking toward many more!