There is something nice about seeing your name at the top of the leader board, even if the result isn’t exactly what you wanted or entirely deserved.

After skipping the indoor season the last few winters I got back into some short track action this January with two 1 mile races. The first at the Greater Boston Track Club Invitational, the second at the USATF East Regional Masters Indoor Championship. Both races were masters races, but the GBTC meet was mainly an open meet with a few masters only events. I mistakenly thought I would be racing against all the top masters guys, and was hoping to be dragged to a fast time. It turns out the top masters guys ran in the open race so the kids could drag them to fast times. The upside was I won my heat, but at least 2 masters runners ran faster than me in the open heat so it was hollow victory.

The second race, being a USATF masters race included some youngish runners, because for some reason they think masters track should start at age 30. This is a bit puzzling considering many distance runners are at their peak at that age, and even runners that peak a bit earlier don’t generally fall off the performance cliff following their 30th birthday. Age complaints aside, I managed to win that race as well. In both races I went right to the front and spent the race trying to stay a stride or two ahead of the competition. In each case I felt as if I was pushing pretty hard, but was disappointed in my times. As I’ve just finished reading Alex Hutchinson’s new book Endure , I’m fairly confident neither race represented the limit of my current fitness. I do however subscribe to Bill Parcel’s old adage “you are what your record says you are” or in this case “you are what your time says you are.” 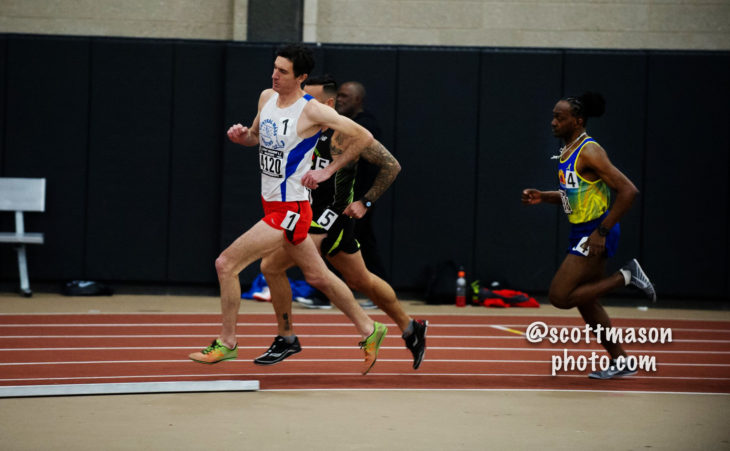 At the GBTC Invitational I ran 4:47.60 on a banked but lumpy track and 4:51.78 at the USATF meet in Providence, RI. Neither time left me fired up, but I’m staying focused on my long term training plan and feeling good about the upcoming spring racing season. I’m seeing steady improvement in my pace during workouts and my new 10 day training cycle seems to be paying off. My next post will be breakdown of this new plan.