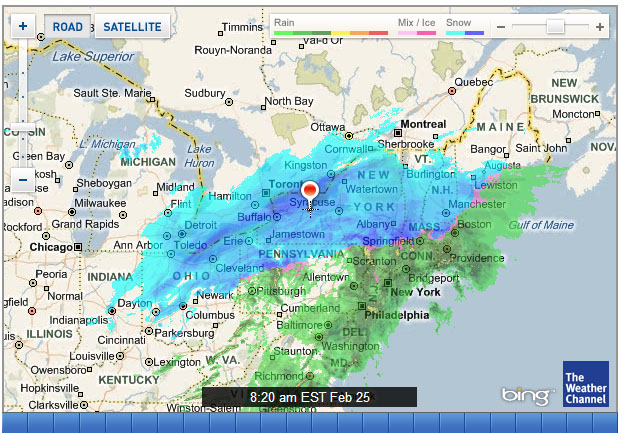 It was just a month or so ago when I was proclaiming how nice it was to just let winter wash over me and embrace it as it part of running in Western NY. Well now it is the end of February and my good will toward the snow is gone. Last week Lisa reproached me for loudly proclaiming “This is Bullshit!” when I saw the weather called for snow on my long run day. Now as another storm rages outside I don’t even have the heart to curse it anymore. I’m just worn out by it, in January we had 3 days with no measureable snow. A few weeks ago we actually warmed up for a few days and 90% of the snow was gone until we got hit by a fresh 10 inches. Yesterday I saw a few patches of grass but after this latest storm and projected temps in the 20’s for most of the next 10 days it will likely be sometime before the ground makes a reappearance.
Tomorrow I’m running the last of the Freezeroo races. A flat out and back 10K course that I was hoping to set a PR on. It is probably going to be about 19 degrees at the gun and who knows what the roads will be like. The crazy thing is I still have a good shot at a PR since my old one is so bad. For awhile I was debating whether or not to run the race depending on the weather. I finally decided I was going to run no matter what. Not because of some inner peace about the weather, but more to spite it. It is my way of saying screw off winter, I’m done with you.