The great thing about being on a team is even if you fall on your face, your teammates can pick you up.  Luckily I did not literally fall on my face (which is certainly possible in xc just ask Mike) I did have an off day– the other members of RKR did not.

It was a glorious day for running, and the Green Lakes Park course was a true cross country course.  Our warm up took us through the first mile of the course and it was all up hill along a windy dirt and grass path.  Despite the course immediately dropping back down hill for a mile it was clear no land speed records were going to be set today.  Also the course was about 3.5 miles long, truly a day to ditch the watch.  At 11 o’clock the 6 of us: Chanse, Jeff, Matt, Rob, Ryan and I lined up with the other 120+ runners.  There were 3 men’s open teams competing besides ourselves: High Noon, Syracuse Track Club and the Genesee Valley Harriers along with 18 other non open teams (masters, vets, supervets men and women teams). 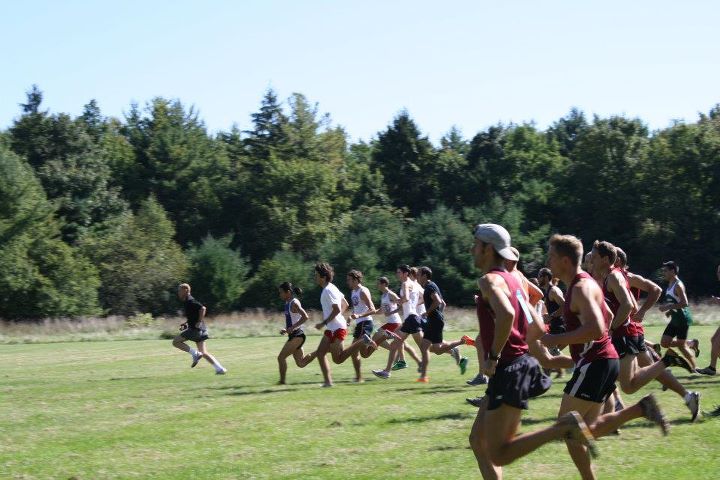 I am not going to bore you with the details of my bad day racing.  I will just say that the first mile up hill through ragweed fields pretty much did me in.  Chanse however, seems to be well over his breathing problems and he led RKR over the hills and through the woods and around the lake to take 4th place overall.

Chance was followed in close order by Rob and then Jeff, all of them finishing within 4 seconds of each other.  Matt and I rounded out the top 5 with Ryan our 6th man beating out and displacing GVH’s 5th man.  With our top 5 beating everyone elses top 4 we knew right away we had won the meet.  Unlike our last victory where we were given a case of Genesee Light in cans, this time we won a case of Long Trail bottles.

In addition to the beer we pick up 6 points and have set ourselves up well for the rest of the series.  Current standings for the 5 race series.

Next race is October 9th at Beaver Island State Park just outside Buffalo.

Roster for the Second race is:

You can see the results from the first race here.

Here are all the photos from the race.