Long-time readers of this site know the mile is my favorite race distance, and since moving to Rochester the McMullen Mile has been my favorite race. For the past 6 years I have been racing in the open elite heat with diminishing success. After chasing 20-year-olds around the track for 4 laps I finally got to race against some men my own age (and older) this year.

The McMullen Mile has always been held on the 2nd Thursday of June. For some reason it was moved to the first Friday of June. This caused 2 problems. First the weather was so bad they had to cancel the meet halfway through and finish it Saturday morning. If they waited until the 2nd Thursday of June it would have been 68 degrees, low humidity and just a slight breeze. Instead it was hot, windy, and eventually a sustained thunderstorm flooded the track. The second problem was it gave me 8 fewer days to recover from the Buffalo Marathon. I suspect this is the reason the race was moved up, just to mess with me, because everything is all about me.

When the elite masters race finally got going on Saturday morning, I warmed up having no idea how I wanted to race. The two best options seemed to be either sit and kick or take it out hard and try to open a gap early. Each had their risks and potential rewards. I was confident that under normal circumstances I could outkick the field, but I was worried that my legs wouldn’t have the gear I needed so soon after the marathon. I didn’t want to get caught in a battle down the homestretch with shot legs. On the other hand if I took it out hard and opened a lead I ran the risk of totally crashing before the last lap. I had done no real speed work in a few months, and while I was in good aerobic shape, I didn’t think I could run more than 2 laps under 70 seconds. 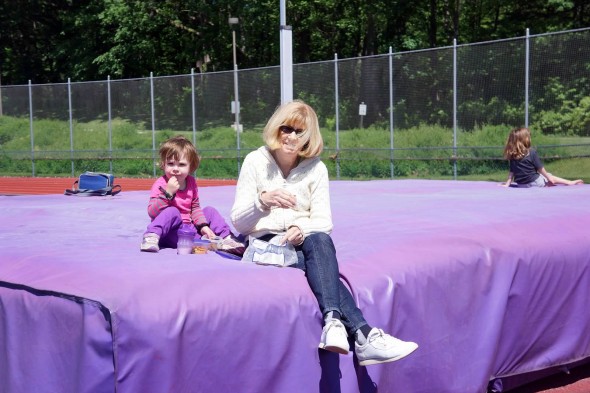 My parents happened to be town so I ran my various plans by my dad. He seemed to think a sit and kick starting at 600 meters was the best option, especially since it was a bit windy on the homestretch. I decided that was my best bet. That plan lasted approximately 18 seconds of the race.

At the gun I started out pretty slow hoping someone would be aggressive and take the lead. That didn’t happen; everyone just got in a line behind me. When I got around the first turn I thought to hell with this and took off hard down the back stretch. That push lasted until halfway around the far turn when the wind hit me. I put on the breaks and by the time we finish the first lap the gap I had opened was gone, and I was back leading a pack. I figured at least no one had the benefit of drafting off me during the windiest stretch.

After a 73 first lap and no sign of me speeding up, a few of the GVH guys made a move to the front. I settled in behind them at what felt like a decent pace. I must have run over 20 seconds for the first 100 meters of lap 2 because even with the GVH guys making a move and pushing the pace we still only hit the 800 meter mark in 2:29.

Once again the sit and kick plan went out the window. I figure I had the wind at my back so I might as well make a move to the front at 800 meters instead of 1000 meters. For the only time I can remember I ran the 3rd lap of a mile faster than either of the first 2 laps. After splitting 73.1, 76.3, I dropped down to 69.1 and then managed to hold on for a 69.8 final lap. It wasn’t the prettiest mile I’d ever run. In fact it was the slowest mile I’ve raced in 12 years. But on that day it was enough. McMullen Mile results.

And that is the thing about racing. It is all about who else shows up, or what shape the people who show up are in. After running hundreds of races, I have a pretty good idea of what I’m going to run on any given day. I would guess that is the same for most of the guys I’m competing with. I knew I had about a 4:48 in me, maybe a 4:45 if everything went right and I really needed it. Anything faster than that wasn’t going to happen for me so soon after the marathon. Any number of guys could have shown up and knocked me off the podium (at least one of them was standing on the grass cheering me on) but they didn’t.

I’ve run PR’s and been an afterthought in the results. I’ve done races as training runs and ran away from the field. It is one of the unique things about our sport, especially when it comes to road racing. I’ve toed the line with Olympians and NCAA champions. Could you imagine showing up to your beer league softball game and the Rochester Redwings were standing in the field waiting to play you? That is what it is like when you drive out to Bergen for a little 5k in August.

With both McMullen and the marathon behind me I’ve decided to have a bit of fun. I’m going to try and age-grade 80% or higher in every distance 100 meter through half marathon by the end of the year. I hope to get all the sprints out of the way in the next few weeks so I can focus on a fall half marathon. I got off to a good start on Tuesday night at the Rochester Summer Track Series . I ran 400 meters in 57.05 which is a PR for FAT 400 meter race and a 81% age graded time according to the latest tables. Next up is the 200 and 800 next Tuesday. I’ll need to run 26 flat 200m, which is going to be very difficult and a 2:12 800m, which is going to be very easy. Luckily if I don’t run a 26 flat next week, I can try again after my birthday on July 6th and I’ll get an extra .25 seconds to hit 80%. Meet #1 results.

If you have kids or are looking to try something new with your running I suggest coming out to Penfield HS on Tuesday evenings this summer. The Rochester Summer Track Series has races for all ages and abilities. It even has field events like long jump, high jump, discus and shot put.

See you on the track.