This last Saturday was the 5th race in the freezeroo series and this race reminded me that it really is winter in Rochester. Matt and I were the only two RKR runner’s willing/able to brave the weather (Matt seemed to be the only one excited about braving the weather). 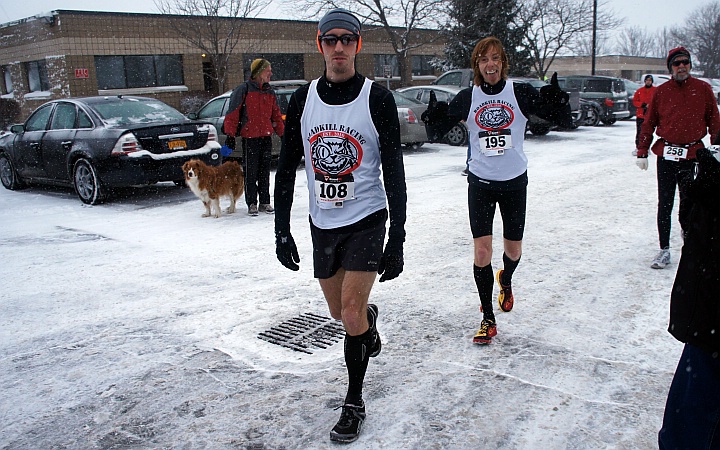 For this race I had a plan that was much different then my usual plan. This was different because I actually formulated the plan before the start of the race, usually I just make things up on the go. I really wanted to reduce the amount of work that I had to do. I was sick the prior weekend and I had not been feeling great during the week. So I knew that I wouldn’t be able to battle with someone for 8 miles for the win. I decided that I would try out a slightly modified tactic regularly used by another RKR member, Jeff. The plan was to hammer the first mile then the modification that I made to Jeff’s racing strategy was that instead of continuing to go all out I would settle into a “comfortable” race pace for the rest of the race. I was kind of hoping that the lead I would get in the first mile would discourage people from catching me. Now with a plan in place I am ready to go. 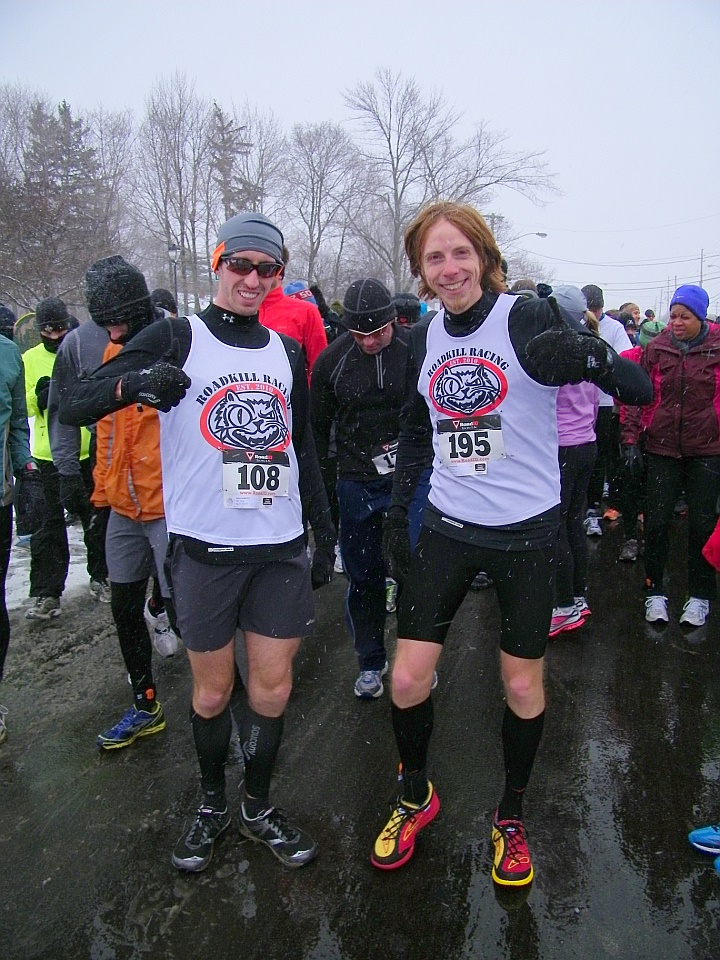 Shortly after arriving at the start Matt decided that it was time to stop screwing around and he put on his game face. Unfortunately I was not ready for such an intense game face and if you could see my eyes in the picture below you would see fear.

The start of the race went very well. I got my lead by starting with a 5:22 mile.

For me, the first half of the race was okay. Once we got out to mile 4 the elements seemed to be much worse. The wind was very unpleasant near the lake. As you can see in the photos, Matt decided that he was too cool for a hat. After the race he agreed that this was a bad choice. Footing was poor for most of the race. The first mile was really the only long stretch of pavement. Everything else was just slick tire tracks in the snow. 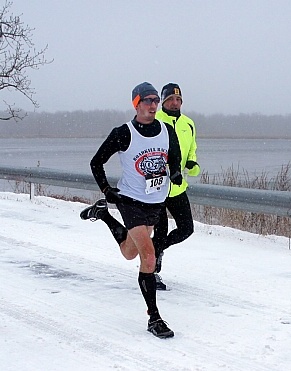 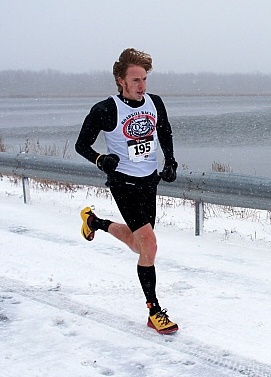 My plan was working pretty well up until mile 6. I started to hear someone behind me. I was unsure if I could hold him off and I was pretty sure that if he passed me I was done for. Around 6.5 mile the person caught me. Then he proceeded to pass me while going uphill with very little traction. This is when I saw that it was Jason Knarr. I was amazed that he was going by me so fast, I actually had to check his shoes to see if he was wearing yak-trax and he was not. This is when I decided that I was not going to win this race. Then after the hill I heard his breathing change. This made me realize that he was actually tired, probably at least as tired as I was. So within a period of about 10 seconds I went from leading the race to accepting not taking 1st, then back to leading the race. Once I hit mile 7 I decided to pick up the pace in hopes of avoiding a sprint at the finish. This worked and I took first with a 46:32. Matt did not seem overly excited about his race, but he still seemed happy with his time. He came in third with a 47:49.