This last weekend five Roadkill Racers made the 2 hour trip out to Groton, NY to try and keep the lead for the series. As stated in an earlier post, we were only 2 points ahead of GVH going into race #4. If we didn’t have a team for Groton then we would have forfeited to many points to have a shot at winning the series. Luckily there were 5 able to go. The 5 were myself, Jeff, Rob, Dan, and Matt Morales. This would be Matt’s first race with RKR and we were very thankful that he could make it.

While we weren’t at full strength, we still had a very good team. We all knew that if GVH took first and we took second then the series would be tied. If we managed to take first then we would have a lead of 4 points and go into the championship with a comfortable lead. So that was our goal. There were only two main concerns going into the race. First was the course. The golf course was built into the side of a hill and we started in the center of the hill. I am fairly certain that there were no flat stretches, the course was always going up or down. Second, we only had 5 runners. This meant that everyone would have to finish.

The weather was perfect for a race. High 40’s and sunny, couldn’t ask for anything better. Lining up at the start we of course saw GVH and a rare appearance by a couple of other teams. Syracuse Track Club and High Noon fielded teams.

I do believe that each race in the series ends up having a story that the race is then known for. The story for this race was definitely the start. For some reason they decided to have a bugle start the race. Everyone was in their pre “on your mark” state (so ready to race, but not crouched and ready to start) then a very faint bugle sounded. Most of us just looked around confused and then we all saw GVH start running. So then the rest of us decided that we should probably start as well.

As a team, the race went surprisingly well, but for a couple of us the race was not very pleasant. I think we all agreed that the hills were the toughest of the series. The footing was great, a very nice change after the muddy Fairport race. The hills definitely wore everyone out by the end. I think Jeff definitely had the worst race experience that day. He said that he had to stop to vomit for the first time ever during a race, and he was only 50 meters away from the finish. Luckily Jeff knew that we needed everyone to finish and was still able to make it.

Even thought we all did our best to conquer those hills, we didn’t manage to win any beer. High Noon managed to put together a very strong team for their home race and took first. RKR was second, followed by Syracuse TC then GVH. The current standings are:
RKR: 20
GVH: 16
HN: 8
STC: 6
View the Race #4 results here. 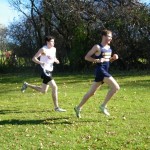 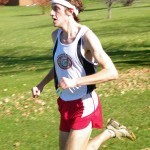 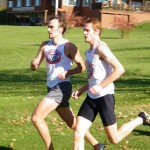 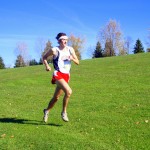 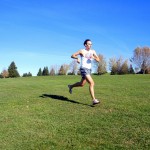